“Mommy! A bird just fell out of the sky!” 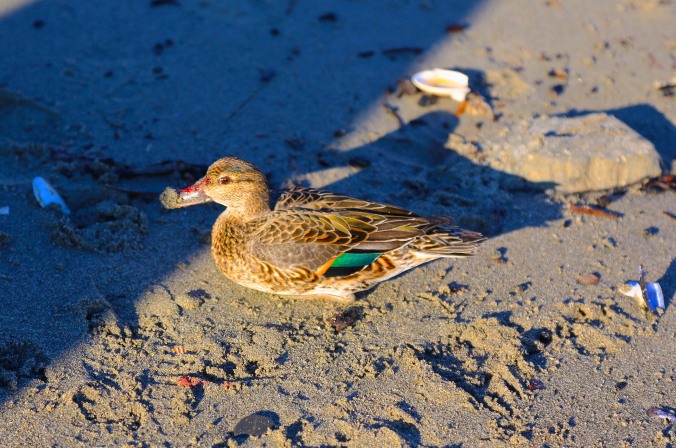 I ran to see what my daughter and her friend had found, thinking a small bird had simply landed on the beach. But the sight was a sobering surprise for us all. A small juvenile mallard was heaving deep breaths of stress as blood dripped from its beak.

No shots had been heard, so it hadn’t been shot at. We looked up and found the answer some 50 feet above. Power lines etched their impression upon a clear blue sky. This little duck met its demise with a fine line suspended between its nesting area and food source, just across the road.

We were at one of our favorite beaches, Bainbridge Island’s Pleasant Beach. Across a little causeway from the beach is an estuary, known as Schel Chelb, where waterfowl thrive and raise their young. It was a bright winter day and this little critter’s flock had taken off from the wetlands to fly over the road to the bay just beyond, in search of food. Sadly, the small duck never saw the power lines that separate home from fodder for these feathered friends. It was flying right into the sun, and likely never saw what it hit.

According to a 2014 article published at the NIH, an estimated 8 and 57 million birds in the U.S. are killed by such collisions. Globally, collisions with power lines may cause more than one billion annual bird deaths.

In 2012, the U.S. Fish and Wildlife Service came out with a manual for best practices in preventing bird deaths due to collisions with power lines. I’ve tried to find it online but have not had any success as all links to it are broken. An April 2005 report, available through the U.S. Fish and Wildlife Service, provides some guidance for reducing the risk of deadly bird collisions with power lines:

“Marking wires and conductors with white wire spirals and black crossed bands in one study reduced mortality by up to 75 percent. Other potentially helpful devices include bird flappers and diverters, such as the Firefly and the BirdMark, which swivel in the wind, glow in the dark, and use fluorescent colors designed specifically for bird vision.”

Why isn’t this location a priority for our utilities to install such preventative measures? I find it ironic that a protected wildlife area, this man-made restored wetlands, is situated next to power lines that are bringing about avian deaths. Surely this isn’t the only case of duck-meets-powerline at this popular duck breeding ground. 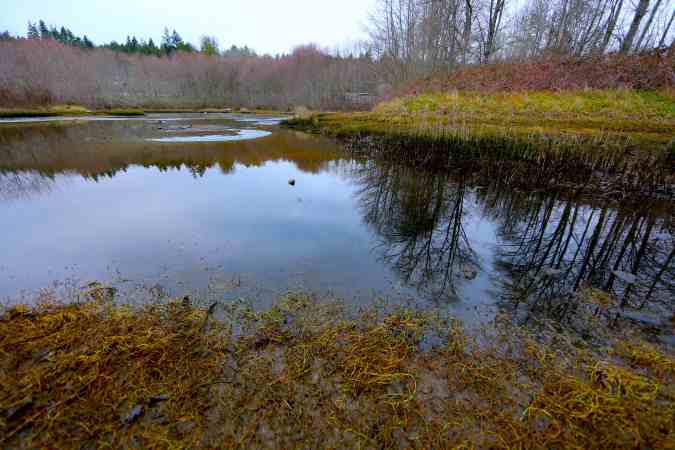 Schel Chelb Estuary: Where The Ducks Are © Liesl Clark

My daughter described the incident: “We heard a big thud. So we didn’t know what it was. I looked over and the duck was on the ground on its side. It was breathing really deeply, its sides going up and down. It closed its eyes and then opened them again several seconds later. After a minute it flipped itself over and stood upright and walked a little bit. But then it just sat still.” 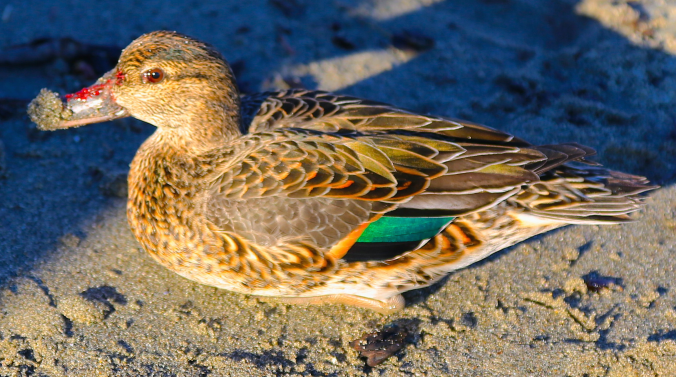 When I arrived, we could see the blood on the mallard’s beak. It was clearly stunned and taking stock of what to do next, like a hummingbird having just hit a windowpane. This little one plummeted 50-60 feet to the beach below, but it was still alive. I was able to capture this one image before the duck flew low, with difficulty, back across the road to the estuary. We followed it to the estuary side and believe it may survive amongst its little flock of mallards and other waterfowl.

We didn’t know why we wanted to go the beach yesterday, other than to feel the warmth of the sun on our faces. But it was no ordinary day for us at the shore. A silently suffering young mallard brought us the bittersweet gift of awareness of a hazard to her species. Have you witnessed such an event? How hard do you think it will be to raise this issue with our utility company and ask them to take the necessary measures to help our friend?

4 thoughts on “The Sky Is Falling! A Fine Line Between Avian Life and Death”